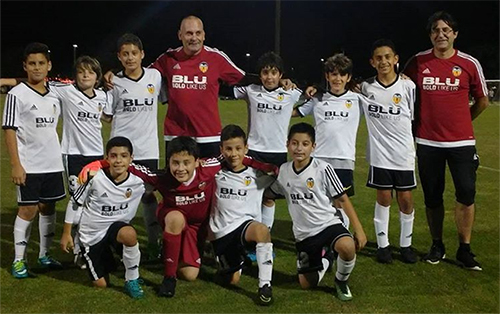 The project supports his soccer academy program in Miami Dade and Broward County.

After six months after the Valencia CF Academy’s launching in Florida State, this is securing as one of the strongest references in competitive soccer in South Florida.

The academy has its Kickoff past June in the Mery Ann Wolfe Theatre in the Biscayne Bay Campus at FIU with some Valencia CF managers and Samuel Ohev-Zion, CEO of Blu Products, a Miami based corporation, the main sponsor of Valencia CF.

From that point, the academy developed its mainly competitive activity in different tournaments over the South East of the United States, like the West Pines Kickoff Classic, the unofficial starting point for the academy base soccer in South Florida, the European Showcase by Luis Figo, and the South Florida SFUYSA. This last one takes Valencia CF Miami teams to different points in the state of Florida like Naples, Wellington, Boca Raton, Park Land, Pembroke Pines,

The academy has right now ten teams, including ages from Under 19 to Under 9, with a total of 130 kids. In this way, the academy brings the players a full program from early ages to college preparatory program or the preparation for the professional soccer player.

The academy actually concentrates its activity in three facilities; at Biscayne Bay Campus in the Florida International University at Miami Dade and Brian Piccolo Park and Middle School Athletic Complex at Broward County.

In the next months, the recreational soccer program for Miami Dade and Broward County will open to boys and girls searching for their first contact with no competitive soccer program.